Getting to Know the U.S., Part 2: Texas and Gulf Coast 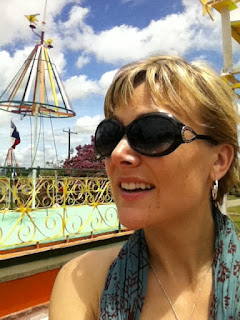 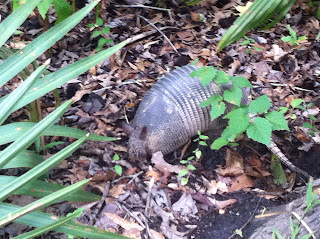 On June 23rd, we were, unbelievably, still in Texas. Houston had so many surprising moments.

We spent the night at Super Happy Fun Land, where the artist ethos thrives and the conversations are encouragingly earnest. It’s a warehouse for huge paper mache Cabbage Patch kids, graffitti mushrooms, old car seats, and every surface is full of knick-knacks. I felt right at home. I dreamed I was back at Reed Reunions, playing a spin the bottle-type game with a roomful of hipster alumni. I stole away from them, found a boy I’d had a crush on at 20, and woke up just as we were falling into a sofa bed. I feel proud, inexplicably, of being able to fall that deeply asleep on a couch in the muggy southern heat with a train whistle blowing periodically too close.

I’d asked people about small museums and got directed to The Orange Show. (Me there, above!) We wound through an unplanned, unfussed Houston neighborhood and suddenly, the circus appeared! This is not a roadside attraction. This is quite far off the road. It’s an entire whirlygig showspace made for the love of oranges. Jeff McKissack built it in 1976-79 by hand, welding whimsical railings and laying many mosiac tiles into the floor and walls. He died before he could actually DO an Orange Show at the Orange Show, but the space is still there, and we climbed the tiny steps, sat in the fixed bicycle seats, and bought the last three postcards left in the empty gift shop. The two Houston artists I asked about the difference between Houston and Austin (who has the unofficial slogan “Keep Austin Weird”) scoffed at Austin’s self-congratulatory attitude and said “Houston is where the culture really is.” I think it may very well be true. There’s something a bit too clean, sanitized, cheerfully white about Austin. Houston has some bayou creeping in.

On our way out of town we stopped at the Rothko Chapel--a circular space with Rothko paintings on the inside that change subtely, slowly, in the natural light. The silence was perfectly strong, and perfectly broken by the occasional human shuffling, and my muscles loosened in the restorative cool.

Finally, LOUISIANA!!
We decided to get off the 10 and take the 90 through more of the bayou/swampland. We wound around, and eventually found Palmetto State Park. We made a friend. His name is Gunther, and yes, he’s an armadillo.

Pit stop in Morgan City, LA. We love the Waffle House. We stopped for eggs and stayed to talk with Crystal, Jagger, and Ifler--the Night Shift Heroes.  I was the first person Crystal had met who ordered tomatoes instead of hash browns or grits with the egg breakfast. This is how the conversation started, actually, with me admitting I was from Los Angeles, and asking Crystal what she thought of Morgan City. “It sucks,” she said. “I need to get out of here.” Crystal told us that she’d beaten an addiction to pills, that her son was about to graduate from high school, and that she made $3.00 an hour. The three of them clearly cared about each other, and this is one of the best parts of the night shift, for me, anyway--the unlikely bonds between people who wouldn’t otherwise have reason to know each other. They were so cheerful, but the truth of their stories were heartbreaking. Not enough money. Not enough opportunity. “There’s nothing in this town for the kids,” Crystal told us. They don’t have anywhere to go, or anything to do. Her son is beating the odds, and I felt her pride. She wants to go back to Houston. We talked about how hard it is to switch shifts once you have built up a group of regulars who like you. Pills are easier to get in Morgan City than meth, we were told. Surprised me. There are a lot of corrupt cops who are on pills, or stealing weed. Ifler had watched a cop pull into her next door neighbors’ place, get high, drink beer, and then get back in his patrol car and drive off. “That’s why I don’t call the cops,” she said. It’s one reason why I don’t either. Somehow, the whole time, we were laughing. Jagger pressed homefries into the grill, smiled and cracked jokes, and I miss them now, after knowing all three of them only for an hour.

And I write it down because they really are the heroes, who are pushing against the forces of corrupt cops, low pay, not enough opportunity, the grief of losing loved ones. I write about them in solidarity and in hope.

We spent the first really poorly planned night of our trip in Houma, LA. We stopped at Jimmy C’s, a bikini bar about 10 minutes from the highway, for a drink and some satisfaction of basic occupational curiosity on my part. What stood out: drinks just as expensive as Los Angeles? Surprised again. Also, the stage for the dancers was sunk in the middle of the bar, with the bartenders walking around it. This meant that the only way to get tips on the stage was to wad bills into tight balls and throw them. In my experience, this is a rude thing to do. At this bar, it was just how things worked. A shifting of stripper paradigms! One of the dancers offered to put us up for the night, so we hung around Houma until 2am, which involved yet another Waffle House and some cramped-up sleeping in the car. Then she bailed. We spent the night at the absolutely most depressing motel I’ve ever been in. I’m saving my details for a short story. But we took some awesome pictures in the morning.

When we stopped at a local diner for breakfast and had two miracles: the best beignets, ever, and a conversation with David: former alligator hunter. Anthony asked, “Are there a lot of alligators around here?” and everyone laughed. Yes, indeed. We learned that they have powerful jaws for snapping shut, but they don’t have a lot of power for opening. So if you land on them right, tie their mouths, tie their legs, and avoid getting chomped from the get-go, it’s a cinch.

We drove through New Orleans, listening to local radio blues and squealing at homes in the garden district. As we drove out of town and toward the coast, I tried to put my finger on the feeling I have in Louisiana. It's a melancholic kind of awe, a sense of the temporary, of beauty being tied so closely with death. The houses are up on concrete blocks because of flooding. The hurricanes are always possible. The insects are loud and the creeping vines don't care about humans, and there's a kind of gentlemanly savagery to it all--breaking open the crawfish and sucking on their heads. Give it to me, Biloxi. Give me that white sand and soft air, give me that purple light at sundown. I love the way people kept saying "Oh come on now!" when I told them where I was from.

Getting to know the USA, Part 1 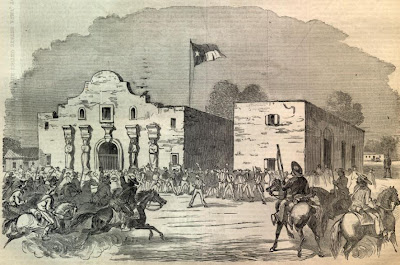 33 miles from Katy, Texas. On our way to Houston. Anthony is driving, and I'm trying not to keep scanning the landscape for signs of life.
This stretch of land is the bleak few days after doing methamphetamine or ecstasy. If that analogy doesn't work for you, imagine the day after Christmas when you were six. If that one doesn't work either, imagine the week after getting broken up with--when you tell people you're okay, but everyone knows you aren't.
I know that there are people who live in this expanse and like it, I know the entire world isn’t totally beige with mediocrity, and yet, yet, I can’t shake the feeling that it’s all just on the edge of despair.
In Arizona and New Mexico, I giggled at the cacti and felt reverent about the mountains. The small towns were quaint and beautiful with clapboard shack bars and smiling people willing to drink with us, smoke with us, talk about their lives with us. At the El Patio Cantina in Mesilla New Mexico we met Andy, a sweet-smiling boy who told us he loved his home and got us high in his ’89 Bronco on medical grade weed. He showed us a video on his phone of the elderly people he works with, proud and laughing like a father might be showing a video of a child learning to ride a bike.
In Texas, the stretches of nothing along the 10 Freeway really do feel like no-thing, a void, not a sprawling freedom like it did outside of Los Angeles.
Exceptions: Comfort, TX, where we pulled off to find a place called the Cocky Rooster Bar, built of metal siding with no windows, where a dart tournement between four people was underway and we drank Lone Star beer with a wonderful man who said he’d seen us driving through town. (?)
San Antonio, TX. Especially the Riverwalk. After the rocky bleakness of the road, the lush tropical Riverwalk helped me breathe again. Anthony and I drank Shiners, smoked cigars, and marveled at the secret world under the city. Our Motel 6 room was bright orange and Mod-looking, with hilarious round cubbies for towels.
I walked alone to the Alamo and spent a perplexing hour trying to read between the lines of popular history. These words, “heroes,” “liberty,” and “defense” all seem leaden, bloated, misshapen. Where were the Indians? Where were the women? There is a series of five-foot-high plaques with timelines and photos and details of the area, an attempt to address the incredibly complex interesction of Native American, Spanish, Mexican, American, and French historical forces...but in the end, the Alamo remains a "Shrine," and it is clear that it's a shrine to a very particular group of white male Texans who were seen as fighting for something like "independence" before the clash between Texas and the U.S. over soveriegnty had begun. That this "independence," this "freedom," was implicitly and obviously tied to the enslavement and/or murder of the peoples already living in the area is somehow elided from the pamphlets handed out by the Daughters of the Republic of Texas. Fascinating that it's still possible, in 2011, to tell a colonial story without including our own culpability.
But I'm seeing and feeling the air change--it's getting warmer, softer, and I know that once we're in Louisiana it'll be harder to get my hackles up since Anth and I will be drinking whiskey sours and eating hush pupppies and the jazz will make my body feel more at home.
And finally, in Houston. We eat etouffee and gumbo at Calliope's, and chat with the server named Stephanie who wishes she was back in Colorado where her hair didn't curl so much. We go to Super Happy Fun Land. Check it out. We're sleeping on the couches here tonight!
at 10:45 PM 4 comments: 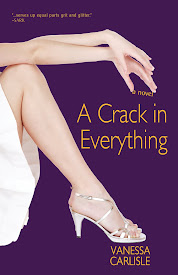